Around 300 people were arrested across Hong Kong Wednesday, as sporadic protests over a controversial new national security law were met by a massive police presence and zero tolerance approach, with pepper spray, kettling and searches used to quickly contain any potential unrest.

Riot police detained and arrested dozens of people in the busy shopping area of Causeway Bay and Central, the city’s main global business hub, during scattered and seemingly spontaneous protests over the law, which critics say threatens basic political freedoms and civil liberties. Multiple protesters could be seen wrestled to the ground by police, and pepper spray and pellets were fired into crowds gathered in densely populated areas. Arrests were also made in Mong Kok, in Kowloon, police said.
“It’s like a de facto curfew now,” former lawmaker and pro-democracy activist Nathan Law told Hong Kong public broadcaster RTHK in the wake of the arrests. “I think the government has to understand why people are really angry,” he added.
Earlier, protests aimed at stopping lawmakers from debating a separate, but also controversial national anthem bill had been foiled by a huge police presence outside the legislature. Lawmakers have begun the second reading debate of that law, which will make it a crime punishable by up to three years in prison “to insult” China’s national anthem, “March of the Volunteers,” and are expected to hold a final vote on June 4. 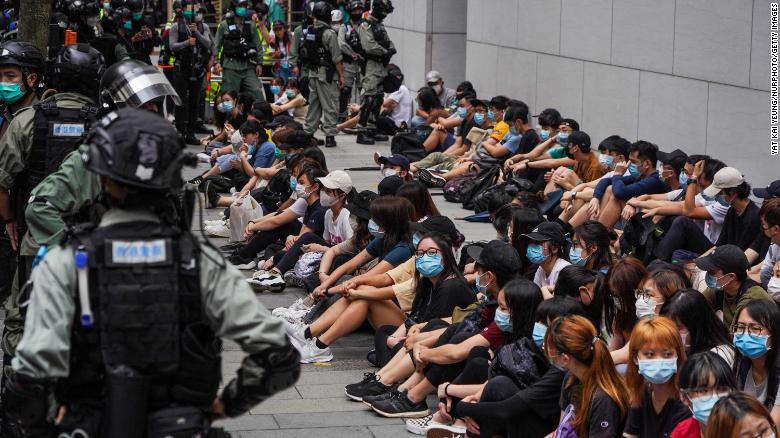 Protesters seen held in a police kettle during a protest in Causeway Bay, Hong Kong.
In a statement early Wednesday evening, police said around 300 people had been arrested across the city “on suspicion of participating in an unauthorized assembly” as well as “possession of offensive weapons” and “possession of tools for illegal use.”
Police said people “occupied the nearby roads and blocked traffic,” disrupting “social peace.” They also released a photo showing dozens of people seated inside a police kettle, most of whom appear to be young and wearing regular clothes, rather than the heavy protest gear seen in previous unrest.
Compared to last year, when lunchtime protests were a semi-regular sight ahead of the coronavirus outbreak, often involving white collar business workers, police demonstrated far less tolerance for any obstruction of roads or other minor disruption. Police were seen detaining people for shouting protest slogans and displaying banners, and one police liaison officer told a crowd in Central through a loudspeaker: “After eating lunch, go back to your normal life and don’t stand here anymore.”

Wednesday’s wildcat protests came in the wake of the newly proposed national security and anti-sedition laws for Hong Kong, which Beijing announced last week it will impose directly on the city in the coming weeks, bypassing the local legislature, via a rarely-enacted constitutional backdoor.
The law has been widely denounced in both Hong Kong and internationally, with observers warning it could curtail many of the fundamental political freedoms and civil liberties guaranteed in the agreement handing the city over from British to Chinese rule in 1997.
More than 200 parliamentarians and and policymakers from two dozen countries signed an open letter last week slamming the anti-sedition bill as a “comprehensive assault on the city’s autonomy, rule of law, and fundamental freedoms.”
One of the leading signatories of that letter, Chris Patten, the last colonial governor of Hong Kong, told CNN that “the Communist party of China which has broken its word about so many international agreements, is driving a coach and horses through the international agreement that it reached with Britain: a treaty lodged with the United Nations, to safeguard Hong Kong’s high degree of autonomy, its rule of law and its freedom for 50 years after 1997. And it’s simply tearing that agreement up.”
Riot police patrol outside the Legislative Council in Hong Kong on May 27, 2020, ahead of a debate over a law that bans insulting China’s national anthem.
For its part, Beijing argues the law is necessary to prevent the kind of violent unrest seen last year during protests over a proposed extradition bill. Chinese authorities blamed “foreign forces” for encouraging or leading those protests, and said that the lack of national security legislation made Hong Kong a “loophole” in the country’s defenses.
Later this month, the United States Congress is due to decide whether Hong Kong remains sufficiently autonomous from mainland China to justify continuing its special trading privileges. US Secretary of State Mike Pompeo said the proposed anti-sedition bill would “inevitably impact our assessment,” and other lawmakers have suggested imposing sanctions against Beijing and Hong Kong officials responsible for the move.
Speaking at the White House Tuesday, spokeswoman Kayleigh McEnany said that US President Donald Trump “said to me that he’s displeased with China’s efforts and that it’s hard to see how Hong Kong can remain a financial hub if China takes over.”
In a reply to reporters questions later, Trump himself said “we’re doing something now.”
“I think you’ll find it very interesting, but I won’t be talking about it today, I’ll be talking about it over the next couple of days,” he said. Pressed later, Trump said the announcement was coming, “before the end of the week.”